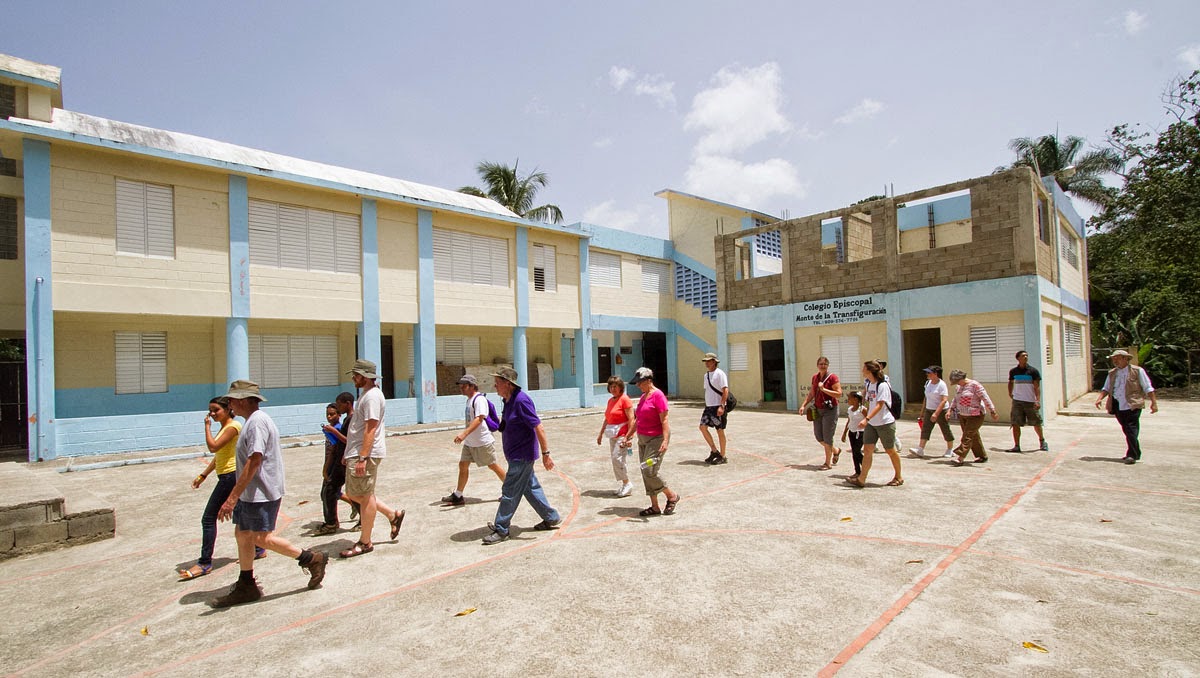 Team members walk past the Episcopal church and school in El Pedregal on their way to the construction sites. Click this image to see more photographs from this event.

The Rev. Tar Drazdowski with two village residents in the doorway of the house we worked on for them during the week. This was one of our two housing construction projects.

From June 15 – 22, 2013, seventeen people from nine different Episcopal and Roman Catholic congregations in Georgia and Alabama came together to form the 2013 Dominican Republic Mission team sponsored by Christ Episcopal Church in Valdosta, Georgia. The group met for the first time at the hotel in Orlando, Florida, the night of June 14 before flying to Santo Domingo. Led by the Rev. Tar Drazdowski the team went to the Campamento Monte de la Transfiguración in El Pedregal to work in construction of two houses and teach knitting and crochet classes to 62 women and children. This was the twelfth year a team from Christ Episcopal Church has gone to the camp. Padre Carlos Santana, his wife, Estefani, and their son, Hector Julio, live and work at the camp.

Welcoming smiles and greetings from friends in the village met us at the camp after a 4-hour bus ride from Santo Domingo on Saturday, June 15. The team spread out in three different housing spaces – the dorm, the motel units, and the small guest dorm. At the Saturday night dinner, Padre Carlos welcomed everyone and announced that he was being transferred to Barahona in August. His successor, Padre Alvaro, was present and also welcomed the team. Julius Ariail announced a gift to the school of the beaded bracelets he had commissioned to be made by a village resident in April. Michael Wood donated several packages of notecards made from paintings he did at the camp two years ago. On Sunday the team went to the church service, toured the work sites, and walked through the village with our Dominican friends. Most of us rode to the river park on two chartered busses in the afternoon. We walked on the trails and some swam.

Each day we began with Morning Prayer in the open-air dining hall to the accompaniment of roosters crowing, birds singing, and the Jimenoa river rushing past the camp. Each evening we ended the day with the Compline service. Each team member chose a day to be the officiant or reader. The Rev. Tar frequently reminded the team that mission work is about having servant hearts and open minds to what God is calling us to do. Every day we prayed for the two team members, Jim Ellis Fisher and Susan Henderson, who were unable to join us because of last minute health problems. That beginning and ending grounded us and was instrumental in forming us into a cohesive and cooperative team.

On Monday the construction crew of Jim Drazdowski, Fred Richter, Penny Spivey, Savannah Spivey, Paul Stevenson, John Welch, Casey Wesselman, and Michael Wood with the photographer Julius Ariail set out after breakfast to deconstruct a wooden house in preparation for a new concrete block structure for Moraima and her family. Next door, they also worked to finish the concrete walls and add a roof for Luce and Alphonso and their four children. Working with a Dominican foreman and several village volunteers, the team worked eight hours a day for four days mixing concrete, forming rebar columns, hauling supplies, building walls, painting and staining rafters and roofing tin, applying stucco to an exterior wall, and putting up a roof.

The knitting and crochet team members Julia Ariail, Carol Cowsar, the Rev. Dcn. Sue Gahagan, Julia Timmons, Helen Tucker, Liz Welch and translator Grady Lacy worked with 15 girls ages 8 to 12 in the mornings and 42 women and teens in the afternoons on several projects. The team brought 14 duffle bags of supplies – yarn, patterns, needles, crochet hooks, scissors, measuring tapes, backpacks for the girls, shopping bags for the women, and plastic pencil boxes to hold all the small parts. They created Colombian scarves, purses, knitted cable bracelets, crocheted bead necklaces and earrings, crocheted and knitted flowers. Penny and Savannah Spivey joined the group on Wednesday and Thursday in the afternoon to teach crocheted edging on baby blankets. On Thursday, the team gave each woman a bag of yarn and left two large bags of yarn to be distributed later. Tar+ worked with both the
construction team and the knitting team at different times.

On Wednesday afternoon the camp staff set up a market for the sale of knitted and crocheted items as well as the beaded bracelets for the village women to sell. Several members of the team walked to the Jiminoa River below the camp to swim after the afternoon construction work was finished. After supper, we all attended a worship service at the church of the Monte de la Transfiguración and visited several families in the village. The fiesta for the children was the afternoon highlight on Thursday. More than one hundred fifty children came to enjoy a splash party with a swimming pool and several tarps for slip-n-slides. Our team provided popcorn, fruit juice and hot dogs for all. The front lawn of the camp was filled with running children, laughter, water, music, dancing, ball games and fun. The community leaders and owners of the houses we worked on brought food for a dinner Thursday evening. Our team bought 10 pizzas from a local pizza shop as our contribution. There was music and dancing and a performance of cultural dancing by the teenagers. Our team gave gifts to Padre Carlos, his family, to the teenagers who helped us during the week both at the construction site and the knitting classes, to the two families whose houses we worked on, and to the women who organized and helped with the knitting classes. We also announced a gift of 25 scholarships to the school for the next academic year and donated the public address system we brought to use in the knitting classes to the school plus some sports equipment to the camp.

The team rode the chartered bus to Santo Domingo on Friday arriving in the early afternoon. Several team members bought souvenirs, and all went to dinner together. The flight to Orlando arrived on time and team members said goodbye to each other as they left the airport. Our hearts and minds were full of the wonders we had seen in each other and in our Dominican friends.